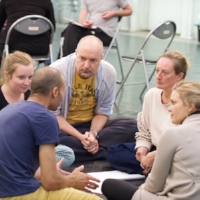 On the ground August 12 -20, we handed over the Dance Hub for in-studio creative possibility under the eye of James Berlyn.

This week of workshops and small group sessions continued to develop the creative trajectory established in the first workshops held at LWDance Hub in April this year. The intention was to build upon the existing body of sketches and draft material produced in the first workshops, developing and devising interdisciplinary and cross-genre responses and repertoire.

The aim is to work as an ensemble and then to also create solo, duo and/or trio outcomes.  A work-in-progress studio showing is scheduled for December 2017 featuring IPCEP performers and creators.

This was a unique opportunity to gather SA’s diversely talented mid-career performers and makers together.

James Berlyn has been a unifying figure in the WA independent landscape gathering together local artists to create Proximity Festival (since 2012) and now with the IMPS Project (Independent Mature Performance Specialists). He has been invited by LWDance Hub to foster independent performance discourse and collaboration here in Adelaide with IPCEP.

IPCEP Stage-2 was a great opportunity to find and nurture skills, build relationships and share creative practices with other local independent performance makers in a supportive and rigorous interdisciplinary context. The schedule of workshops is structured to create maximum accessibility and flexibility for working professionals.

James is an award-winning performing artist and lecturer of more than twenty five years experience. Trained in dance at VCA, he has worked in dance, dance-theatre, theatre and community art across the country and internationally as a creator, performer, director and curator.  James’ hybrid one-on-one theatre work & installation Tawdry Heartburn’s Manic Cures (2009) had more than 1000 performances at major festivals across the country including Perth International Arts Festival, Brisbane and Sydney Festivals, Ten Days On The Island, WOMADelaide, Enlighten ACT, Melbourne’s Festival of Live Art and the Adelaide Cabaret Festival.

He is the co-founder of Proximity Festival, Australia’s first and only festival of one-on-one performance, and was a founding co-director of Tracksuit, WA’s adult disability performance company supported by DADAA WA. James is WA’s only accredited trainer for Ausdance’s Skill Set: facilitator and assessor and a core artist with Performing Lines WA.

James was an assessor for the 2014 Total Theatre Awards at the Edinburgh Fringe. He also created a new solo work in Basel, Switzerland with director Jim Hughes, premiered in Perth 2015-2016. Other highlights include premiering his solo theatre work Crash Course at PICA in 2013 and APACA 2014 and Awesome Festival commissions Dreamstore, Splat! and Twyping.  James directed on PIAF’s Tenebrae et Lux (2013) and assisted on You Once Said Yes (2014) as well as performing in Sue Healey’s Variant (2012), Sam Fox’s Prompter at Arthouse in Melbourne and as Lord High Executioner in ICW Productions The Mikado (2014). James also created the role of Agamemnon in Matt Lutton’s Elektra for PIAF and WA Opera (2012).

James has recently been appointed Executive Producer of the WA Youth Theatre Company.